We’ve done it. The birds do it. Football players do it. The Pope has done it. Former Presidents do it. People from Vermont do it. Ballerinas do it. Heck, just about everyone on the planet does it. What is it that brings us all together in unison? We all MOVE, sooner or later.

Twenty years ago, Doug decided to leave beautiful New England and move somewhere along the southeast coast. Just like Goldilocks, he had to find just the right porridge. In the end, his research said that Hilton Head was too hot, Charleston was still too warm, but Wilmington was just right!

Today, the HH/Bluffton/Beaufort area is one of the more popular destinations for people searching for a milder year-round climate. In general, if we meet with someone who decides for whatever reason to not migrate to Coastal NC, the two other favorite destinations for them to research are Florida and HH/Bluffton. Therefore, let’s take a look at both Hilton Head/Bluffton/Beaufort and Wilmington/Brunswick County.

Before we look through at the stats, one of Doug’s best buddies, Bill Bucci, lives on Hilton Head Island. Bill and Doug used to work together (Rivers Edge & Ocean Ridge Plantation) years ago, and before he left to retire full-time and be with family, he worked with the team at Carolina Plantations for a bit. Well, we may not call what he did “work” but he did hang his shingle with us!! Anyways, Doug would visit him 3-4 times a year and have some pretty valid insight on that area. 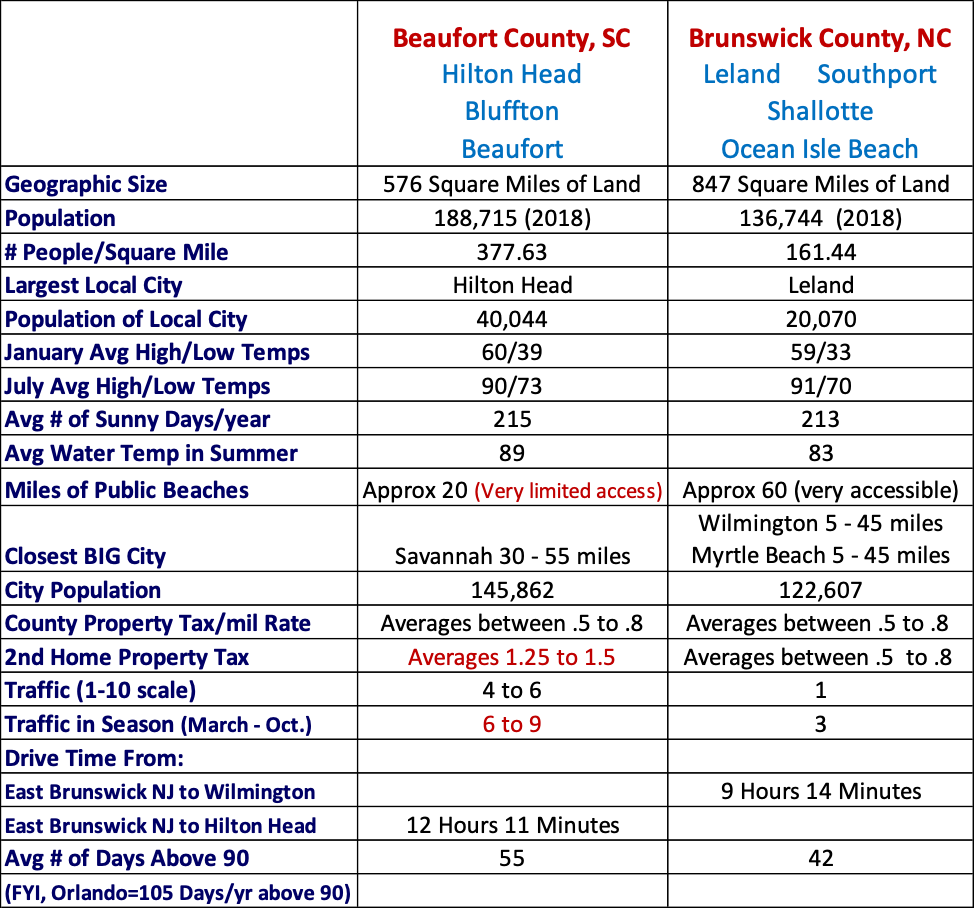 As one compares each bit of information above, there are a lot of similarities. The items that stand out to us just about every time we visit though, are traffic, density and limited beach access. In particular, however is density, because Brunswick County only has a handful of hotels, verses a large number and variety of mainland hotels, plus beachfront high-rise hotels and condos in the Hilton Head area. When visitors do show up, there is a tsunami of them and man of man does it ever get crowded! Hwy 278 is the 4-lane highway leading out to Hilton Head Island, and that is just one road you want to avoid at all costs during season. For that matter, it’s still a road too well traveled 365 days a year!

The other factor that Doug believes is important in weighing the pros and cons of HH/B/B, is the distance to a real city – and that is Savannah. If you live on the island, Savannah can be a good hour drive, not including traffic. That is where really good medical care is, and while a HH/B/B has a lot of shopping and dining opportunities, there is no concentric area such as a downtown to go strolling. Wilmington has nearly 100 restaurants in downtown, so park once, stroll along the 2-mile Riverwalk, choose from an eclectic group of restaurants, enjoy live theater and nightlife, topped off with a romantic horse drawn carriage ride. Sounds nice, doesn’t it?

Doing your research is critical to finding just the right place for you. The Hilton Head/Bluffton/Beaufort area has a lot to offer and if you intend to go, let us know as we have a great friend who is a Realtor in that area. She will take excellent care of you. Just send Doug an email at Doug@CarolinaPlantations.com. We look forward to helping you and your family with your relocation needs to the NC Coast!