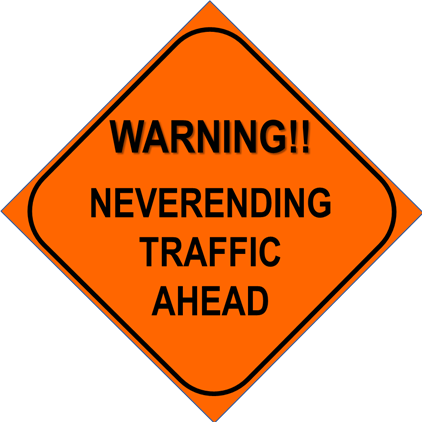 Do you think it would be safe to say that most American’s do not enjoy traffic? Granted some have to endure it for their jobs or personal reasons but, does anyone get in the car and go join in a traffic jam because there’s nothing good on TV? For the most part, we believe happiness is a choice. You wake up and if you want to be happy, you do everything within your power to do so. Traffic is also a choice, as you either live near it and deal with it, learn to schedule your time life around it, or reside where the traffic is minimal.

Don’t Let Traffic Get You Down

If you let it, traffic can pretty much run ruin your life, for if every time you want to leave your home you need to consider the traffic patterns outside your driveway and beyond, you are a traffic prisoner. And let’s face the facts about traffic & health – has any doctor ever said that heavy traffic reduces your stress levels?

When it comes time to move, especially for retirement, how much emphasis should be placed on traffic around your home and/or town? If you enjoy traffic, well, be sure Atlanta, Miami and Tampa are on your list! However, if you are normal…,shouldn’t you research traffic patterns of where you will spend your golden years?

Where Do You Want to Be

In a few days, Doug will be turning 62, and for the past couple of years, he has considered buying or renting a home in Florida – primarily for January ad February. Those two months are typically our slowest and being able to go deep sea fishing regularly, and play the horses and dogs, and visit a casino – well, Florida does offer some things we don’t have in Coastal North Carolina.

However, there is this thing called traffic, which no matter how attractive parts of the Sunshine State can be early in the year, they just aren’t attractive enough to endure the rising blood pressure received from that mass of vehicles on just about every highway and byway. Nope, just can’t do it.

Traffic, by the way, is not indigenous to Florida. A couple of weeks ago, Doug drove down to Kiawah Island to see a dear friend and when he left his office in Shallotte, GPS told him his ETA was 4:30 pm. He left an extra half house in case he ran into traffic in and around Charleston during rush house. Ha – boy did he miscalculate! The bumper to bumper traffic in Mt. Pleasant on the northside of Charleston was nuts. Plus, once he crossed over the high-rise bridge in downtown Charleston, the traffic crawled the next 15 miles to the Kiawah exit. Needless to say, he was way late and, unfortunately had more of the same the next day when Doug drove down to Hilton Head for a good buddy’s surprise 80th birthday.

Traffic on the North Carolina Coast

In 1999, Doug left the northern suburbs of Boston for the warm ocean breezes of Wilmington, NC. Traffic was really non-existent here back then and even with all our growth, our traffic today is nothing compared to so many (southern) cities. He lived in Atlanta during the 80s and have often said that for $5m/year, he wouldn’t move back there because his quality of life is far too important. Here is a list of cities that you will never find him living in full time.

Might visit, but never set up a residence there. If you are wanting to flee from the traffic filled cities and move to a slower paced life, then allow us to help you find a new place. We at Carolina Plantations can help you find your next home that you too can enjoy the North Carolina Coast.